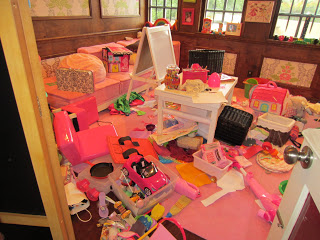 Fall fun and festivities have begun, and this weekend we kicked it off with an Octoberfest at the girls’ school, the first fall carnival of the season, and a rocking 10th anniversary party for one of the hippest couples we know. In between all of the fall fun, I found time to tackle a monster of a project that I have been putting off for months. The girls’ playroom is such a massive project that it took much of two afternoons for me to complete it, and I still have some small details to sort out. But, for the most part, it’s done. Not only was the playroom completely trashed after a series of fun playdates, but it was in desperate need of its biannual overhaul. I always try to tackle this project at this time of year, so that I can donate the toys that the girls have outgrown and make way for the influx that inevitably comes with Christmas and Eva’s December birthday. So, in all its horror, here was the playroom yesterday, before I started:

Stuff everywhere! This room is impassable and chaotic.

The aftermath of a few fun playdates.

Several hours later, here are the girls enjoying the results:

The storage system on the right is the Cameron system from Pottery Barn. Love its versatility.

Afterwards, I invited (ahem!) Kevin and the girls into the playroom, where I explained which baskets held their most prized possessions. I also laid down some ground rules:

Play in the Playroom

Toys that are not picked up by the end of the day (they’ll get a 5 o’clock warning) will be put away for a week.

If they toys are not picked up at the end of the day, no ticket is earned that afternoon. (We use the Accountable Kids system, and a ticket earns the girls a TV show, craft, playdate…)

Love Them or Lose Them

Toys that are not played with will be donated. (I turned the baskets around so that I can see if they’ve been handled, much the same way I do in my closet). So that’s the system. I really need it to work, so wish me luck! The constant chaos of clutter in my house is really wearing me down, but I am not yet ready to admit defeat!