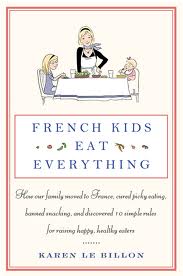 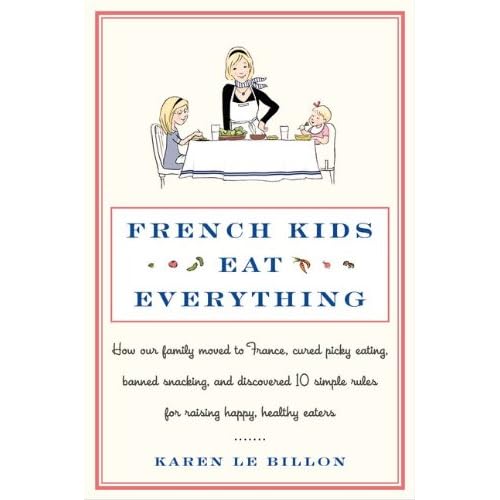 I had the amazing opportunity today to speak with Karen Le Billon, the author of the much-talked-about new book, French Kids Eat Everything, which hits stores today. Despite a schedule that included a whirl of interviews, a chat with Katie Couric on Good Morning America, and an evening book signing at a Madison Avenue store, Le Billon took the time to answer some of my most pressing questions about strategies for dealing with picky eaters,
I spoke to Le Billon from the interior of my mom-mobile, strewn as it was with a half-finished Coke can, an almost empty bag of Goldfish, and assorted bars (Clif Bars, Kind Bars, Annie’s Homegrown Peanutty Bars). On the passenger seat next to me was an item I am rarely seen without: a small cooler bag holding two straw-topped bottles of water and two sippy cups of milk. Another cooler bag with an entire carton of Horizon Organic Whole Milk with DHA was nearby. Clearly, I have an irrational fear that my kids and I will be stranded at a nearby park with no food around for miles. Let’s just say I like to be prepared.
Le Billon was once a snack-dispensing, Goldfish-toting mom like me. And then she moved to France, where kids eat four-course-lunches and moms refuse to pry snacks into their kids between meals, believing (and this is shocking) that if they are hungry, they will eat better at the next meal. Revolutionary!
Her newfound role as an “accidental food activist” (her own words) had a charmingly inauspicious start: She moved to her French husband’s small village in the North of France, two picky daughters in tow, without a single French cookbook in her possession. “I am a full time working mom,” she said. “I found the whole thing so stressful. I burned pots and pans, and I was at a loss as to what to do. I was the opposite of Julia Child. But the transformation of my eating habits and my family’s eating habits were so astounding. I didn’t know what French parents were doing that made them so successful at this, so I decided to look into it.” So did I. Here, just a few of the ways French kids are raised to appreciate fine dining, right from the start. No arm-twisting required.

The French differ fundamentally in their approach to food, according to Le Billon: “The French believe that all foods taste good and that there are no bad tastes, or very few, anyway. We expect that our kids won’t like the spinach and we set them up and almost teach them not to like healthy foods. In France, one of the first things they give their children is a very thin leek soup puree, and they believe that it tastes good. Kids are innately open to all tastes.”

The French assume that if you don’t like something, then you just haven’t tasted it enough times. French scientists have learned that it can take anywhere from seven to 15 tries before a child will like a new food. So now when my child rejects a new food, I say: ‘That’s okay. You’ll like it next time.’ Or she says, ‘I’ll like it when I grow up.’ It’s about simple, patient, firm, loving, exposure to as many foods as you can imagine.”

I love the distinction that Le Billon makes between picky eaters (in my family’s case, Eva) and fussy eaters (Lola). Picky eaters have a fear of trying anything new, and they want to limit their diets to a few favorites. Fussy eaters like to assert themselves through their diets, by arbitrarily refusing foods that they had previously tried and enjoyed. It’s a way of testing boundaries.

French Kids Can Be Picky, Too

“Age two is when neophopia kicks in,” Le Billon told me. “This is when children develop a fear of new foods, and it happens in France, too. It kicks in at the no stage, when kids are starting to say no to everything. The difference in France is that they have a way of helping kids transition out of that and overcome picky eating, and not letting it become a habit or a personality trait. It’s fun; there is no bribery or coercion or force. It’s about a healthy routine in which kids are exposed to a wide variety of foods.”

Le Billon tells me that 90 percent of French families have a sit-down family meal together every day. “They think it’s as important to teach your child to eat as it is to read. The believe how a child eats affects school performance, mental and physical health, IQ… Just like reading, the investment is just a little bit of time every day. It’s incremental. French families only spend 18 minutes more per day cooking than we do. Gourmet is how people eat at the very fine restaurants, but that is not how they eat at home. France has the same percentage of working moms than the U.S., and their workday is longer. They are not spending three hours in the kitchen like Julia Child. I am not someone who is into fancy food. But the French have some great ideas for simple tasty recipes that anyone can make.”

The Challenge of a Picky Eater

Removing the opposition from kids is a tactic that French parents use with great success. “You don’t have to eat it, but you do have to taste it,” Le Billon says. “Most of the time, over time, they will like it. My older daughter is much more of a sensitive picky eater than my younger one, but she eats mussels and she eats spinach. It removes opposition from kids  If the child refuses to eat they take it away; there is no worry or anxiety, but they don’t feed them again until the next meal. They don’t worry too much if the child gets a little hungry. That just means they will eat better at the next meal.”
Le Billon accepts that the firmness of French routine might raise objections in some American parents. “The kids don’t make all the choices; the parents set the guidelines.” These guidelines include structure, when a meal is served, what is served, that kids eat what adults eat, and that they have to try new foods. “It requires the parent to say ‘I’m in charge,'” Le Billon says. “But it’s not about being controlling or getting anxious or forcing or making this an oppositional war with my kids at all.”

The Challenge of the Fussy Eater

This doesn’t mean that French parents are not above a little coercion, when it’s called for. “If a child is older and they are playing a game and being fussy and they used to like it, then the French don’t mind insisting that a child eats. That’s when they say: ‘You don’t have to like it, but you do have to eat it.’ They only do that if the kid has eaten it and liked it in the past. There are many different reasons why kids say no; sometimes if it’s new and unfamiliar if might mean that you have to do, as the French say, tame the new food. They just have to taste it. A friend’s nine year old son recently refused to eat his broccoli, which he used to eat, and I said to him: ‘No one is asking you to like it, but you do have to eat it.’ His dad actually told me that it was a like a magical transformation.”
Tomorrow, Part 2 of my talk with Karen Le Billon, when we tackle snacks, convenience foods, and school lunches! Oh, and I will actually start reading the book tonight, so you’ll hear my feedback as well!