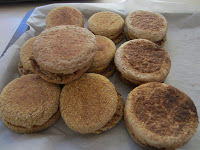 Lately, my husband Kevin has been taking my older daughter to school more often, which means that both of them have to be out the door by 7:30. Unfortunately, he doesn’t make it dowstairs until it’s time to head otu the door, so I have been handing him makeshift breakfasts on his way out the door, like the granola/yogurt/fruit parfait in a styrofoam cup that he left the house with today, or the cereals bars and fruit that I give him most days. Some days, after I feed the girls and the dog, and make lunch for Lola and occasionally Kevin, there isn’t enough time to even think about his breakfast, so I wanted a quick, filling, and most of all HEALTHY breakfast he could grab and eat in the car. I decided to make my own breakfast sandwiches and breakfast burritos, and they were so easy. A little over an hour later, I had made a dozen breakfast sandwiches and half a dozen burritos. Here was my technique for the sandwiches: 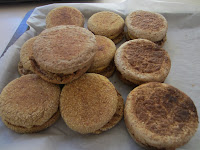 1. Start with super-healthy English muffins, like Ezekiel or Vita-Muffin brands. Toast the muffins. 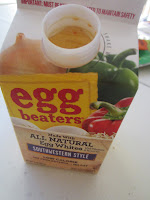 2. Pour Egg Beaters (I used the Southwestern style because it’s preseasoned) into a greased muffin tin. (I wish they were organic, but the Organic Valley eggs  at Publix were not seasoned and were egg whites only – and Kevin isn’t a big fan of scrambled whites. I will try them next time though. Or just use organic eggs and season them myself). Bake at 350 for about 20 minutes until they are set and puff up a little. Mine came down after they were out of the oven. Set aside. 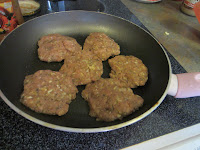 3. Make Turkey Sausage Patties: It’s super easy. I used a recipe that called for a mix of your favorite seasonings (you can make it sweet or spicy), an egg a couple of tablespoons of melted butter, and that’s it. Simply combine the seasonings with the sausage, and if you have time, chill for a half hour or so. Then form into patties and cook in a skillet with a little butter or cooking spray until cooked through. (I nuked mine in the microwave for a minute afterwards just to be sure!) 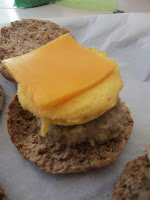 4. Assemble: I put a piece of parchment paper on a baking sheet, and then I opened up the toasted muffins, topped each with a sausage patty, a “muffin” of scrambled egg, and a slice of cheddar.

5. Wrap them individually in plastic wrap, Press n Seal (what I used) or foil (if you will be heating them int he oven or the toaster oven).

6. Put them on the baking sheet and freeze them until solid, then toss them into a gallon-size freezer bag until ready to use. Simply heat the ones covered in wrap for 2 to 2 1/2 minutes in the microwave. Or if you are using foil, heat them in the oven at 350 for about 15 minutes, or in the toaster oven. 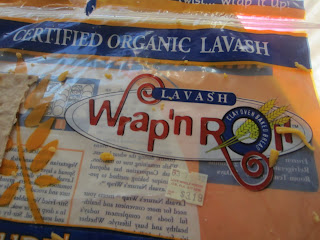 1. Choose a very heathy wrap, flatbread, or whole wheat/whole grain tortilla. I used these lavash wraps because I had them, but I actually think thinner softer wraps, like tortillas, would be better.

2. Scramble some eggs (I used the rest of the second container of Egg Beaters) until done. Remove from pan and set aside.

4. Cook some crumbled sausage (from a tube, I used an organic meatless sausage, but you could use chicken or turkey if you want) in the same skillet. When done, add some healthy bean and cheese dip to the sausage, in the pan, and mix well. 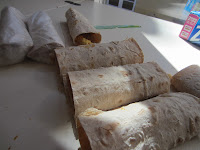 5. Put a little of the sausage, some scrambled egg, and some shredded cheese (I happened to some vegan Cheddar on hand – let’s see how that goes over with Kevin) in each wrap, and roll it up. Not that this is a vegan dish – with the eggs and all. LOL 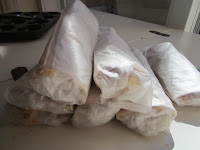 6. After assembling all of the wraps, cover them in squares of plastic wrap or foil, place on a cookie sheet or a flat surface of your freezer, and freeze. Then put them in a gallon bag and label.

7. These cook best in the microwave, for about 2 minutes. Again, healthy, portable, and FAST. : )