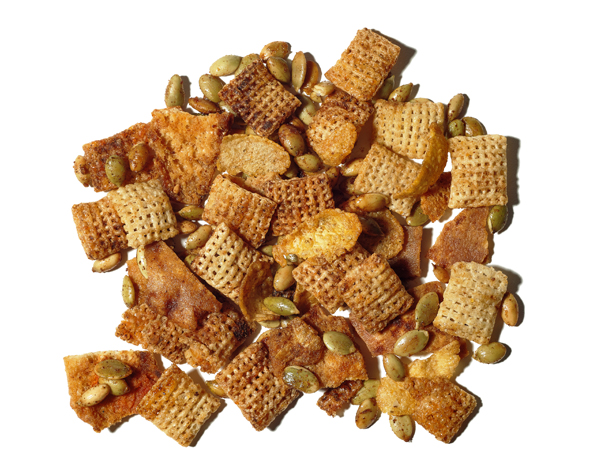 It was a rainy afternoon, so I spent much of it in the kitchen, getting a head start on the week. I’ve been uninspired by the breakfasts I’ve been serving my girls lately, so today I tried out two new breakfast ideas: Breakfast Trail Mix and Sneaky Chef’s Cornflake Cheese Pudding.

Breakfast Trail Mix:
Lola never met a snack she didn’t like, but she’s reluctant to eat much of the real food I put in front of her. She is also very active and likes to graze. Unfortunately, she hasn’t liked many of the granolas I’ve tried lately, so I decided to make my own mix for her – one that I knew would be healthy and that she would love. I combined equal parts Corn Flakes (I need to find an organic alternative to this) and two kinds of Cascadian Farms organic cereals: Fruitful O’s (aka Fruit Loops) and Multi Grain Squares (aka Chex). Then I added raisins and raw pumpkin seeds and served it to them in a bowl, no milk, just the way Lola likes it. I served it with fruit and that was their breakfast. It’s fast, easy, not messy, and portable, for those times when you have to take breakfast on the run. And best of all – she loved it. Eva did too, if not quite as much.

Sneaky Chef’s Cornflake Cheese Pudding:
This recipe in my Sneaky Chef cookbook always intrigued me, but it also sounded a little odd, so I was reluctant to try it. However, I happened to have all the ingredients: organic cottage cheese that my husband, who is the only one who eats cottage cheese, felt was too creamy, and flake cereal (I subbed Corn Flakes for Wheaties). So I decided to give it a try. It’s baked in a loaf pan, and when it’s done, you slice it, almost like a combination of a light cheesecake with a little crunch from the cereal. And because it’s from The Sneaky Chef, it had some white bean puree mixed in. I made it too late for today’s breakfast, but tomorrow I will serve slices of it with maple syrup, as recommended. I don’t know yet whether my girls will like it, but I know I will, so at least it will be worth the effort. : )

Elie Krieger’s Spicy Snack Mix:
The reason I bought Corn Flakes to begin with was this very simple recipe for snack mix from Ellie Krieger. Lola, my snacker, is obsessed with Chex Mix, which she only gets at my mom’s house. I refuse to buy the bagged kind because it has so many preservatives in it and is high in sodium, so I was intrigued by this chance to make my own. It’s a mix of Corn Flakes, the MultiGrain squares, pita chips (I used flatbread chips because I had an open bag), and pumpkin seeds. Overall, I thought it was a pretty good recipe, but I needed to use quite a bit more seasoning to give it flavor. Otherwise it would have been pretty bland. Also, I only needed to bake it for about half the time. Any longer and it would have burned!

I had so much fun playing around in the kitchen today, something I haven’t had the chance to do too much of (I tend to go in spurts with cooking, depending on my time and what else I have going on!), that I decided to make something a bit more special for dinner. I had some fresh mint left over from another recipe, so I made Lamb Chops with Mint, Sauteed Long Green Beans with Garlic and Lemon, and, as a special treat, I baked up some frozen French baguettes – an obsession the girls and I share!