I guess it’s hair week here at Beautymommy. Today I took my girls to a nearby salon for a haircut. They were both long overdue, since the last time they had a cut was last August in Paris! Lola was very excited and into it, and had decided that she wanted her hair “shoulder lank” (LOL!) and curly like her much-admired cousin Maddie. Unfortunately, her baby fine, stick straight hair, while thick, is nothing like Maddie, who has very thick curly hair, with beautiful big ringlets. She cooperated beautifully during the entire haircut, as the very talented Jackson asked her to stand up in her chair so that he could get to the very long, pretty straggly ends of her hair. She stood for the entire cut, which took well over half an hour, and possibly closer to 45 minutes. When he was done, she had the shoulder “lank” hair she wanted, with a beautiful shape and gorgeous bangs. Then, to make her happy, he gave her a few curls with a curling iron. Unfortunately, they were almost gone by the time we got home, only five minutes away. Here, both of the girl’s before their haircuts! Lola is in the red and white! 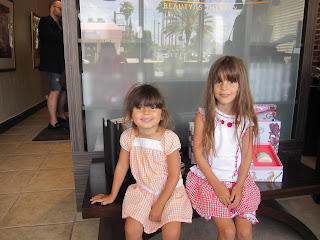 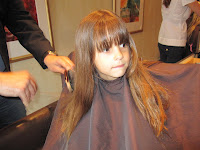 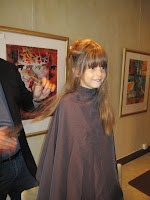 The first snip comes off! Now there’s no turning back! 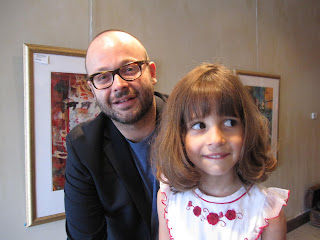 A happy, sassy Lola with her new look and her hair hero, Jackson!
And now for a less dramatic change for Eva, who, even though she can usually sit as still as a little mouse through bang trims, earring changes, etc., refused to be patient this time. She stood, like Lola did, but agreed to do so only if I sat in the chair with her. Jackson worked quickly, since that’s all she would allow.Eva’s hair isn’t as thick as Lola’s, but it’s fluffier so it can look thicker. She also didn’t have any ideas on how she wanted her hair, and I wanted to keep some length, so we took a few inches off, maybe 3 or 4, and trimmed the bangs. Just enough to clean it up! Here’s the end result: 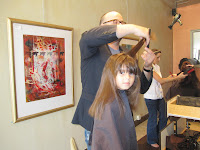 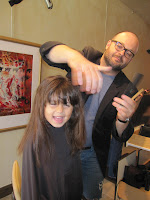 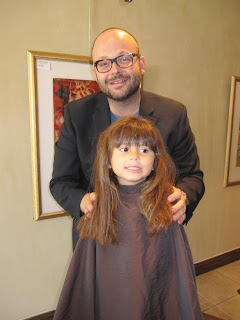 Ta da! The cut is over, and that’s all Eva will sit still for, so no curls for her. Of course she has some natural curl anyway. : )
Overall, a successful and relatively uneventful trip to the salon with the girls!