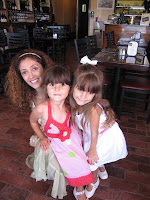 Before: Poofy hair on Palm Sunday. 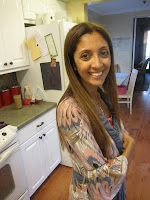 After: Flat hair tonight, in time for Easter

Some of you may remember when I wrote about the Brazilian Blowout a couple of years ago. I was so discouraged when, after several hours and a few hundred dollars, my hair was virtually unchanged. Today, however, was a different story. After postponing it a couple of times, I finally gave in and agreed to try a keratin treatment. After my hair was colored as usual by my friend Marjan, another amazing stylist, Noelle, combed the keratin treatment through my hair. After she had applied the treatment to only one side, when my hair was still wet, she had me compare the difference, and it was dramatic. The hair with the treatment on it was smooth, while the other side had already started to frizz. She then proceeded with the treatment, which included a blowdry followed by some heavy duty time with the flatiron. The entire appointment took 3 1/2 hours (including the color at the beginning), which is admittedly a really long time, but as the treatment lasts for months, it’s well worth it. When I turned to face the mirror, I was so shocked that I swear I heard angels singing. Sure, my hair was straight, but I’ve had great blowouts before, so that wasn’t what won me over. My hair was straight and sleek, but instead of being puffy and straight, it was sleek and straight, almost flat. FLAT. My hair has never, ever, ever been flat. I love flat. My husband was shocked (as shocked as a man with very limited interest in my hair can be) that no hair had been removed. Where was the volume, where was the poofiness, and where was the FRIZZ. Now, more than 10 hours after I’ve left the salon, and after an entire hot, humid day in Florida, there is no sign of frizz. For three days, I need to be super careful – no hair ties or accessories of any kind and absolutely no water. When I do wash my hair, on Monday, I will be using a special shampoo and conditioner that come with the treatment. And, or so I’m told, I will be left with smoother, looser curls, no frizz, and more manageable hair. I was even told that another client, whose hair is very similar to mine, has stopped using any product in her hair!!!! My hair will still be curly, but it will take far less effort and less product to make it look good, and it won’t expand every time I spend time outside on a humid day.
I already know that this is the most revolutionary thing I have ever done with my hair. I know that it’s going to be life-altering, but I don’t know the extent of the change yet. I’ll know more on Monday, after I wash it and live with it for a little while. So stay tuned… More pictures, and an update, to come next week.
In the meantime, HAPPY EASTER, everyone. May the love and peace of Jesus be with you and your family during this holiest of holidays!