For the better part of a year, at least, I have been looking for a healthy alternative to regular pancakes. I am trying to avoid the white flour/white sugar in our diet, except for an occasional treat, and I wanted to be able to prepare a yummy breakfast that I could feel good about giving my family! I have occasionally given in to the allure of Organic Batter Blaster, which is an amazing concept and makes fabulously fluffy pancakes, but even though they are organic they are not whole grain. My sister just gave me a box of Fiber One’s pancake mix, which her family really likes, but I haven’t tried it yet. When I do I will update this post! And I also read a nutritionist tip about mixing one-quarter cup of wheat germ into the recipe for Bisquick’s Heart Smart Pancake Mix, but I wanted even more nutrition. So the quest began, and here is my journey, and reviews of some of the popular pancake mixes/recipes out there.

Recipe #1: The Sneaky Chef Chocolate Chip Pancakes
My first attempt at healthy, whole grain pancakes was the Sneaky Chef’s recipe, using her signature flour blend (a combo of whole wheat flour, all purpose flour and wheat germ). I am normally a fan of The Sneaky Chef’s recipes and have had a lot of success with them (my husband said he would eat the Pulled BBQ chicken sandwiches every day) but these did not work for me. They were leaden and cardboard-like in texture and had none of the taste or the fluffiness you associate with pancakes. Even the chocolate chips didn’t help. They did not go over well at all, and even prompted my brother-in-law to ask if I had made a mistake with the recipe. I will give these one more try, but the first attempt was very discouraging. 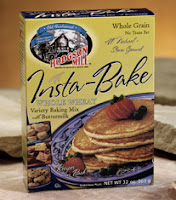 Recipe #2: Hodgson Mill Whole Wheat Insta-Bake Pancakes
This mix claims to make healthy baking simple, but my family flat-out refused the heavy, tasteless pancakes this mix produced. I am hoping to use the rest of the box for some of the other recipes, like muffins. 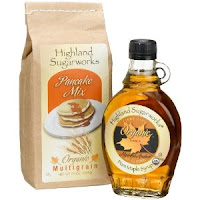 Recipe #3: Highland Sugarworks Organic Multigrain Pancake Mix
This is the brand used by our restaurant, Ivy Lane Bistro, but when I made it I didn’t have the same success. The whole family rejected it! 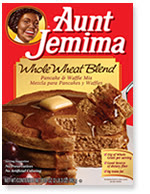 Recipe #4: Aunt Jemima Whole Wheat Blend Pancake Mix
This was a second-best option for me from the start, because it’s not organic and it’s whole wheat and not whole grain, but it was better than the white alternative, so I gave it a shot. To sweeten the deal, I added cocoa powder to the mix and made it in the princess baker so that the pancakes came out in princess shapes, and then I served them with confectioners sugar sprinkled on top and some healthy-ish chocolate pudding for dipping, and served them as dessert. In spite of the hard sell, the girls still ate the sugar and the chocolate pudding and skipped the pancakes. 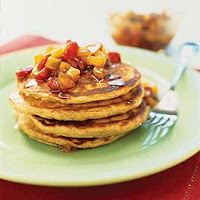 Recipe #5: America’s Test Kitchen Multigrain Pancakes
I am a huge fan of America’s Test Kitchen’s new Healthy Family Cookbook. It, and my other favorite, Not Your Mother’s Slow Cooker Cookbook, are never far from my side. The first recipe I tried was the Multigrain Pancake recipe, and I had high hopes. It uses Familia Brand No Sugar Added Muesli, ground in the food processor, as a flour, which is genius and save the trouble of making your own multigrain mix. Then you add whole wheat flour and a little all-purpose flour. I skipped the 1/3 cup of unground muesli that the recipe calls for, because I wanted a more conventional pancake texture. The batter is a little involved, because there are quite a few ingredients, but it’s very easy. I mixed it up in 20 minutes, covered it with Press ‘n Seal and popped it in the refrigerator in the evening. The next morning, I made the pancakes, and they were a hit! There is a slight sweetness to them from muesli, and they were light and fluffy and totally yummy! Yeaaaaaa! There were plenty of pancakes so we ate some over a few days (my girls only eat 1 pancake each), and I froze some for future breakfasts. This is definitely a make-ahead batter, in my opinion – I just don’t have the time on a weekday morning to whip up this kind of a recipe, so making the batter the night before, or making a huge batch on Sunday and serving them all week long works really well for me. Next time I will try them with some Sunspire Organic Chocolate Chips or some organic frozen blueberries. Here’s the recipe:
Ingredients
2 cups whole milk (do not use lowfat or skim)
4 teaspoons fresh lemon juice
1 1/2 cups no sugar added Familia muesli (you can use Alpen or another brand, but they recommend Familia)
3/4 cups all purpose flour
1/2 cup whole wheat flour
2 tablespoons brown sugar
2 1/4 teaspoons baking powder
1/2 teaspoons baking soda
1/2 teaspoon salt
2 large eggs
5 teaspoons canola oil
3/4 teaspoons vanilla extract

Whisk milk and lemon juice together in a medium bowl and allow to thicken, 5 to 10 minutes. (I never noticed that my milk thickened but it worked anyway). Process muesli in a food processor until finely ground, 2 to 2 1/2 minutes. Transfer the processed muesli to a large bowl and whisk in the remaining 1/4 cup muesli (I left this out), the flours, brown sugar, baking powder, baking soda and salt.
Whisk the eggs, 1 tablespoon of the canola oil, and the vanilla into the thickened milk mixture until combined. Make a well in the center of the muesli mixture, and pour the thickened milk mixture into the well. Whisk very gently until just incorporated (a few lumps should remain). Let the batter rest for five minutes.
While the batter rests, heat a 12 inch nonstick skillet over medium heat for 3 to 5 minutes and brush with some of the remaining oil. (I used a larger electric skillet and butter spray). Using 1/4 cup of batter per pancake, add the batter to the skillet, and cook until large bubbles begin to appear, about 2 minutes. Flip the pancakes and continue to cook until golden brown, about 1 1/2 minutes.