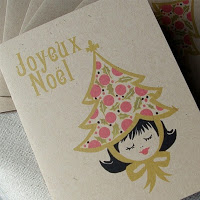 Tomorrow I will resume my Christmas decorating ideas, but first, I want to tell you all the details of the Christmas party we had last night for 50 or so of our closest friends! I love having a theme because it makes the party planning (and hopely the attending!) so much more fun! Last year I couldn’t decide on a theme and didn’t end up picking one, and I felt like the party lacked something. In the past, I’ve done Retro, Arabian Nights, Black/White, Stars, Candy Canes and Cocktails, etc. This year I was inspired by our trip to Paris to do a French-themed party, and planning it was at least half the fun. The countdown began early when my thoughtful friend Andrea sent me a massive loaf of wheat bread from Max Poilane, Paris’ most famous bread baker, direct from the city itself! What an amazing surprise. 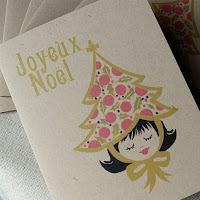 THE INVITATIONS: It was a real challenge to find French Christmas-themed invitations, and I did a lot of digging before discovering a very talented artist on Etsy, with a store called the Craft Pantry, who does lovely cards and stationery. As soon as I spotted her whimsical Joyeux Noel cards, I was in love. The adorable little girl reminded me of Eva, and they were different and quirky and adorable.
THE MENU: Our restaurant, Ivy Lane Bistro, catered the party, and the French themed spread that our chef Phil created was unusual and ambitious: cassoulet, oysters prepared three different ways, scallops in sage cream, Roquefort salad with walnut vinaigrette, cheese choux pastry shaped into pretty shells, and boudin noir, a blood (black) sausage pudding – which was a real conversation piece, even though it definitely wasn’t for everyone. We also had tons of cheese, bread, foie gras and accompaniments.
THE DESSERT: For the centerpiece on the dessert table, I ordered a magnificent croquembouche, essentially a tower of profiteroles covered with spun sugar, a traditional French Christmas treat, from the best patisserie in town, The Pastry Studio. Sheri also made me some decadent, trendy French macaroons in assorted colors and flavors. I rounded out the spread with Dancing Deer organic peppermint star cookies, Organic Breakfast tea from St. Dalfour, and MarieBelle coffee.
THE DECOR: The decorations were mostly just elegant and traditional with a touch of French flair. In the past, almost all of the decorations I have done were directly related to the theme, but this can be challenging and expensive and, after the party is over, you are stuck with a bunch of stuff you will never use again. So this year I sprinkled some Eiffel Tower ornaments and decorative French accessories throughout the house to add to the French ambiance. I will post pictures as soon as I can!
THE OUTFIT: I had originally planned to wear a CHANEL sweaterdress I bought a few weeks ago, but putting it on just minutes before the party, I decided it was too casual and not special enough, so I pulled out a CHANEL shell that is part of a suit that I have had for years. It is cream with black patent leather trim and is tunic-length. I wore it with a black mini embellished with rosettes along the bottom, and it looked like a dress. I accessories with sparkly black J. Crew tights, Cynthia Rowley scrunched booties, a long J. Crew gold and pearl necklace, and a shorter, 3-strand pearl necklace with a black flower detail from Stell & Dot.

THE FAVORS: I love coming up with party favor ideas, and I decided I wanted to do Fleur de Sel caramels in little gift bags. I bought these handmade caramels from The Caramel Jar, a store on Etsy, and I also bought the favors and favor tags on Etsy, from another talented paper artist, PaperEclectiquesDeux. Each bag contained a few caramels and foil wrapped chocolates from a local chocolate factory.